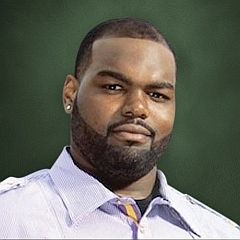 In his senior year, he took over as the starting left tackle and quickly became one of the top prospects in the nation.  He was a multi-talented athlete for the Saints being named state runner-up in the discus and helping lead the basketball team to a 26-6 record which resulted in the district championship. He still holds the discus record in track & field.  Michael went on to Ole Miss where he was a 4 year starter beginning his career at guard, then moving to left tackle his sophomore year.  He ended his career with the Rebels with the third best active consecutive starting streak (47 games) among SEC players.  He was a consensus first-team All-American and first-team All-SEC choice as a senior in 2008 when he won the SEC’s Jacobs Award given to the conference’s top offensive lineman.

Upon completing his collegiate career Michael was selected by the Baltimore Ravens in the first round of the NFL Draft. He went on to spend 5 seasons with the Ravens and was a starter on the winning 2013 Super Bowl team.  In 2014 Michael signed with the Tennessee Titans as a free agent and started the first 11 games of the season as right tackle before being placed on the injury reserve.  This past March, Michael was signed by the Carolina Panthers where he remains on the roster as a 6’4, 315 lb. tackle. Michael was the subject of the best seller “The Blind Side: The Evolution of a Game” by Michael Lewis, which was made into a major motion picture in 2009.  He also authored the book “I Beat the Odds” published in 2011.
Back