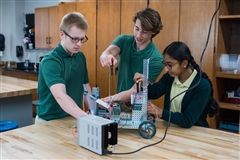 Why Choose a Co-Ed School?

They will need these skills during their years in college and later in the workplace.
Proponents of single-sex education promote what they believe are the benefits of all-boys or all-girls schools.  However, we think it is important for you to know that in a recent issue of Science, an article was published entitled “The Pseudoscience of Single-Sex Schooling”1.  The following excerpt from this article is instructive:

In attempting to improve schools, it is critical to remember that not all reforms lead to meaningful gains for students. We argue that one change in particular—sex-segregated education—is deeply misguided, and often justified by weak, cherry-picked, or misconstrued scientific claims rather than by valid scientific evidence. There is no well-designed research showing that single-sex (SS) education improves students' academic performance, but there is evidence that sex segregation increases gender stereotyping and legitimizes institutional sexism.

Most colleges and workplaces are co-ed. Real life is co-ed. A co-ed school prepares students to be able to learn, interact and work with students of the opposite gender. It is better for young men and women to learn these social and interpersonal skills in the controlled environment of a co-ed, K2-12, Christian school rather than waiting until they are cast into the unfamiliar environment of the freshman year college experience.
Back