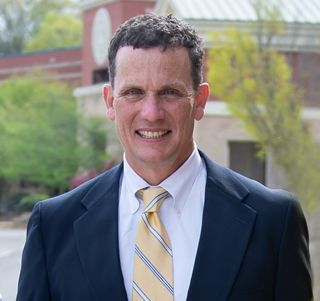 Dr. Andy Pierce (BCS Class of ’87)
Dr. Andy Pierce is a passionate physician who has built his career around serving his community as he is led by the Lord.  The Briarcrest Alumni Association is pleased to recognize Dr. Pierce as the 2021 recipient of the Paul Piper Distinguished Alumni Award.
Dr. Pierce became a Christian in 1986 on a Young Life Ski trip. As a Briarcrest student, Dr. Pierce was involved in FCA, recognized as a letterman in football, baseball, and basketball, and ran track.
After graduating from Briarcrest, he attended the University of Memphis, majoring in Mechanical Engineering. He graduated in 1993 and returned to Briarcrest High School to teach Physics and Chemistry during the 1995-1996 academic year. Dr. Pierce and Mr. Eric Sullivan also coached football and basketball together that year.
Dr. Pierce went on to attend medical school at East Tennessee State University in Johnson City, Tennessee, and completed his residency in Internal Medicine and Pediatrics at the University of Tennessee Health Sciences Center in 2004.
After completing his residency, from 2004 to 2010, Dr. Pierce served as a staff physician at Christ Community Health Services, a hospitalist at Le Bonheur Children’s Medical Center, and an assistant professor at the University of Tennessee Medical Group, where he also served as in the Emergency Medicine Department. In 2010, Dr. Pierce and his family relocated to Cookeville, Tennessee. He served as a pediatric hospitalist at Cookeville Regional Medical Center and as an internal medicine hospitalist at Johnson City Medical Center.
In 2012, Dr. Pierce and his family relocated back to Memphis, where he continues to lead as physician, hospitalist, and attending physician for resident education at Methodist University Hospital/University of Tennessee Health Science Center. This past year, Dr. Pierce and his medical partner staffed the COVID-19 unit at Methodist University Hospital.
Dr. Pierce served on the Briarcrest Board of Trustees from 2013 – 2019. Dr. Pierce has received many awards throughout his career, most recently recognized as the Outstanding Hospitalist Physician by the Society of Hospital Medicine in 2021.
He has been married for 25 years to his wife, Jennifer. They have six children: Sion, Sophie, Lucy, Elizabeth, Sarah Grace, and Andrew. His family enjoys spending time together at the park, lake, beach and backyard.  Outside the hospital, Dr. Pierce enjoys fishing, motorcycling, international medical travel, sailing and exercising.  His family is active at First Evangelical Church in Memphis, where he has been involved in mentoring college and high school students for several years.
The Briarcrest Christian School Paul Piper Hall of Fame Award was established in 2004. This award is given annually to thirty-year graduates of Briarcrest Christian School who have shown outstanding achievement in their professional careers and who have been recognized for their influential leadership and support of educational, civic, religious and charitable causes. The award is named in honor and in memory of Mr. Paul Piper, a highly successful Christian entrepreneur whose foundations have provided financial support to so many causes.


To read more about the life of Paul Piper, visit Historical Newspapers.

If you would like to nominate an alumni, please complete and submit the online nomination form here.